In BPMN, gateways control process flow. A gateway tests an outcome of a preceding activity: it can not perform work itself. BPMN contains XOR or Exclusive Gateways and Parallel Gateways.

BPMN is a hierarchical modeling language. In another article I discussed the difference between tasks and subprocesses already, but in this article you will learn everything about the use of gateways in BPMN.

In BPMN, gateways control process flow. A gateway tests an outcome of a preceding activity: it can not perform work itself. A gateway can have as many gates as you want, it is not limited to two, and the specification does not describe that they have to connect to the points of the diamond. The XOR gateway can also be drawn with an X inside. The X-OR gateway means: only follow the path of the true data condition. A gateway should be seen as conditional logic: a gateway often tests a decision, that occurred previously, in an activity. The result of that decision, is an end-state of the activity that makes it. The gateway tests the end state of the activity. It does not make a decision, since tasks are the only objects in BPMN stat can perform work.

In BPMN, the terms XOR,  Exclusive Databased Gateway and Exclusive Gateway are used interchangeably. However, they mean the same thing. Another difference with traditional flowchart diagramming, is the fact that in BPMN, gateways do not make decisions. Making a decision is performing work, and as we discussed earlier, work is only performed by activities.

The first diagram is thus incorrect: a gateway can’t approve anything, it can only test if a condition is met.  You need an activity for approving the invoice. All human work, decision making or other process logic that is performing work MUST be modelled as an activity. The gateway that follows the activity, often containing a yes/no question, can only test a decision. The second diagram shows how you should model a decision. Note that approve invoice is modelled as an activity, and the gateway only tests the end state of the activity: approving the invoice, which is returned by a simple yes or no. 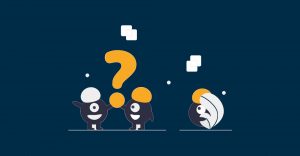 What about BPMN Certification? Is there a certificate that proves your skills in BPMN? Well, kind of. In this article we will discuss how you can prove you are a BPMN expert. 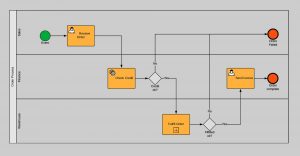 In this article we will discuss the practical applications of BPMN using real-world BPMN Examples and BPMN Diagram Example. 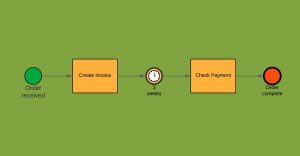 There are three types of BPMN Events: start, intermediate and end event. A BPMN event is something that happens during a business process. In this article you will learn everything you need to know.

Become a BPMN 2.0 Expert in 1 day. With this practical hands-on course you will learn proper Business Process Modelling
START LEARNING
Try for free

Do You Want To Become A BPMN Expert ?

Check out the BPMN training Get 50% OFF
on your first order